Sometime between late 1994 - mid-1995, Thinkway Toys made prototype versions of the characters before making the actual toys to sell to the public. Very little information is known about them and there are hardly any pictures of them. In April 2020, an Instagram user, Harry_Tricks_3D, found a full photo of the original prototypes on the back of a coupon from the original Toy Story soundtrack. These prototypes are rumored to be in the possession of John Lasseter or the staff at Thinkway Toys. 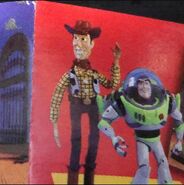 The very first pull-string doll featured a removable plastic hat with a faded brim. It also featured wired armature, unlike the toy in the actual film. In later releases, this feature was removed along with the sewn-in buttons, and the smaller pull ring because they caused a safety hazard. This version without the armature was released in all subsequent versions of this Woody doll, along with other future pull-string Woody dolls. There was also an extremely rare, 4-foot tall version of this doll with the exception of a pull-string.

This Woody doll was also re-released and modified by the Disney Store and Disney parks several times, without the first edition's wired armature. Thinkway became no longer associated with this version in the U.S. upon Disney Store's acquisition in 2002, as they chose to develop their Woody toy in their own direction. Some of these re-releases include:

The 4ft tall Woody Doll, also known as the Frito Lay Woody or Giant Woody, was produced by Thinkway Toys for the release of the first two Toy Story films.

In 1995, Thinkway Toys created the 4ft tall Woody doll to promote the release of Toy Story on November 22nd. Thinkway used Pixar's computer generated files to produce this doll, as well as the Poseable Talking Woody and other releases. This doll is also known as the Frito Lay Woody because he was used to promote Frito Lay products in grocery store displays where their products were aligned with the movie. These dolls were never released to the general public as actual toys and were only made for store displays and promotions. They were produced in limited numbers but it is currently unknown how many of them were made, for years it was thought to be 150 in total, but in May 2021, this was proven false. The number 150 was actually referring to the Cargo Tracking Note (CTN) number for some of the shipping boxes of the 4ft Woody.

This doll was possibly used in a parade as well but it is currently unknown what parade he was used in.

This version of the 4ft Woody is extremely rare since it was never released to the public. It is near impossible to find one in pristine condition and it is lucky to find one under $200.

He has a slim waist, is poseable, has a fragile hat made out of PVC, has head and hands made of heavy duty vinyl, clothes made of cloth, and the boots and badge made of leather.

After the promotion of Toy Story ended mid 1996, many of these dolls were given away or sold to collectors.

According to eBay seller, luvtim71, (s)he claimed to have acquired three of them after the promotion ended at Frito Lay in 1996.

"I worked at Frito Lay at the time and about 6 months after the promotion, I was at the warehouse and my boss and I were talking and he said he wanted to know what was in the pallet at the top of the warehouse racks.  We found 6 of these dolls that were never used, so we split them and I got 3 of them new in the box.  I gave one to a relative and another was sold on eBay about 10 years ago (that one was opened and used...I got $1,700 for that one)."

A small number of these dolls have been accounted for online, it is unknown where the remaining number of dolls are.

It is speculated that they are either in private collections or have been destroyed.

The Adventure Buddy Woody doll was released in 1995 by Thinkway Toys. There were two versions of this doll, a Jumbo version, which had an almost identical design to the 4 foot tall Woody doll, with the exception of having plastic hands, and a small version, which had an identical design to the Poseable Talking Woody, with the exception of having a voice box, plastic hands, and a plastic hat.

Much like the 4ft Woody doll, the 3ft Tall Buzz Lightyear Doll was created to promote the release of the first two Toy Story films.

The original 1995 version of this doll was never released to the general public as actual toys and were only made for store displays and promotions. They were produced in limited numbers but it is currently unknown how many of them were made, for years it was thought to be 300 in total, but in May 2021, this was proven false. The number 300 was actually referring to the Cargo Tracking Note (CTN) number for some of the shipping boxes of the 3ft Buzz Lightyear. 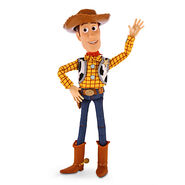 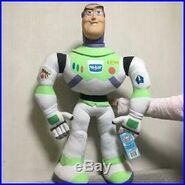 3ft Buzz Lightyear doll, originally used for promotional displays until they became publicly available in 1997 and later re-released in 1998/99 for the release of Toy Story 2. (1995) 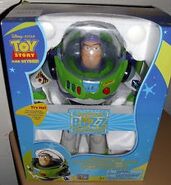 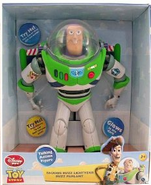 Retrieved from "https://toystorymerchandise.fandom.com/wiki/Original_1995_Woody_and_Buzz_Lightyear_releases?oldid=6757"
Community content is available under CC-BY-SA unless otherwise noted.