The Talking Buzz Lightyear Room Guard was made in 1997 by Thinkway Toys. It says 35 phrases and has a retractable helmet, removable base, firing laser with timer, pop out wings and his own room sensor. To turn on the room guard, press his voice simulators twice. After he talks, press it again, then after 30 seconds he will be in room guard mode. Press his voice simulators and he will tell you that you entered the wrong code, press them five times and he will turn off the guard. 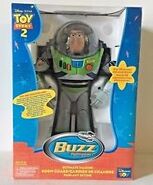