Pullstring Ragdoll
Sheriff Woody Pride is a character of the Disney/Pixar film franchise, Toy Story. He is a rag doll cowboy toy with a pull-string mechanism similar to Mattel's or Matchbox's vintage talking toys, in which one would pull the toy's string (a phonograph-like mechanism) to hear it talk. He is voiced by Tom Hanks but usually voiced by Jim Hanks on merchandise.

There have been several attempts to make real-life Woody dolls from as early as 1995 to coincide with the first film's release, yet all existing ones have an electronic pull-string mechanism rather than the traditional phonograph, and only one Woody doll features all the pull string phrases said in the film, albeit with extra quotes. Tom Hanks does not voice any of the real-life Woody dolls (Except the Drop-Down Woody), but rather, his brother Jim Hanks takes his place.

His favourite colour is red

A traditional toy from the late 1950s, Woody is a rag doll replica of the character from the Woody's Roundup television show. His assembly is almost entirely hand-made, including a hand-painted face and hair on his vinyl head, hand-stitched polyvinyl hat, a naturally dyed vest blanket stitched to his main body, authentic pearl-colored snap-buttons as would be found on Cowboy shirts of the time, vinyl hands, soft, textured vinyl belt, holster, and cactus-imprint boots, genuine denim jeans, golden yellow spurs, a yellow belt buckle, a red garnet embedded within the holster, and, finally, a removable metal sheriff's badge to denote his status.

Woody also features a sewn-in pull-string mechanism that uses a miniature record within a plastic shell. When the string is pulled, the needle in the miniature record player drops on one of several grooves, thus playing voice clips at random. The speed regulator within the mechanism also causes the string to retract slowly so that the voice from the record plays at the proper and consistent speed.

From the beginning, Woody's pull-string phrases have been a notable part of the films. All of these lines were recorded for the first Toy Story, though the "I'd like to join your posse boys..." line was cut and reused in Toy Story 3. Woody features at least seven quotes, though Toy Story 4 splits "Yeehaw! Giddy up partner! We've gotta get this wagon train a-movin'!" into at least two separate lines, "Yeehaw", and "We've gotta get this wagon train a-movin'!". Considering the circumstances of how the line was spoken in the first movie, his string being snagged, it's possible that these are all separate phrases played in succession. This would also make logical sense by giving Woody nine voicebox quotes, the same number the Prospector supposedly featured based on his packaging. The list that follows takes this into account.

CORRECTION: In the first Toy Story, "Yeehaw! Giddy up partner! We've gotta get this wagon train a-movin!" is all one line from one string pull. Therefore, the only logical answer to why it's separated in Toy Story 4 is due to either an inconsistency in pullstring quotes or simply because there's a version that is cut up and a version that isn't. Please fix this!

Poseable Pull-String Talking Woody Doll
This Woody Doll is the first one made. It doesn't have his original voice.
This is what he says

This is a re-release of the Woody Doll above.
Variations this figure released starting in 1996 and continuing through 1999 feature a variety of changes. Some have the spurs on the boots removed completely, and some have a different badge design altered from the original to be less accurate to the movie. The version without spurs is seemingly always found with the inaccurate badge, but the inaccurate badge continued to be used through Toy Story 2 and in the early 2000s Disney Store releases with spurs included

Electronic Sheriff Woody Talking Figure
This doll was released in markets outside of North America by Mattel, who had the license to distribute non-replica toys in Europe and Australia. It is very similar to Thinkway's cheaper dolls, but with a unique sculpt and pattern. Oddly, he is only 14 inches tall, one inch shorter than he should be. In some ways, he is more accurate to the film than the Signature Collection release. He features a flatter, smaller badge with less pronounced points that is much closer to the film, and glossy yellow paint applications for his buckle, spurs, and holster, as opposed to the Signature Collection's inaccurate gold paint.
There are two versions of this doll, one from 2008 featuring pull string quotes based on the ones from the movies, and a Toy Story 3 version featuring quotes specifically from that movie. Like all dolls, this one is voiced by Jim Hanks.
The first version quotes are as follows.

The post-TS3 version features these phrases

Of note, this doll is the first Woody doll to feature either the quote "Somebody's poisoned the waterhole!" in the first version, and "I'd like to join your posse boys, but first I'm gonna sing a little song." in the second.

Based on Disney and Pixar's digital data, this Woody is advertised as the most accurate toy available. He features a few pull string activated quotes and an "Andy's Room Woody" mode, activated/deactivated by pulling his string once. In the "Andy's Room Woody" mode, he'll respond to talking, detects the difference between loud and soft noises, and will speak on his own. After a short period with no interaction, he'll go into sleep mode and can be woken by pulling his string again.
He features a soft head with textured, vinyl styled boots, belt, and holster, and buttons that are more accurate to the movie appearance than other Thinkway releases (Though they are not genuine snap buttons, simply plastic molded and painted to look like it). His hair also features painted streaks which are not present on any other Woody doll.
The toy is packaged in a box featuring Woody's Roundup styling and includes a certificate of authenticity signed by John Lasseter and a stand with a star-shaped base. 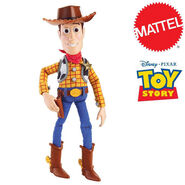 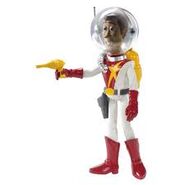 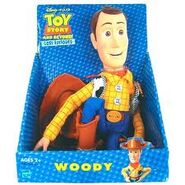 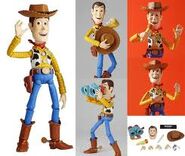 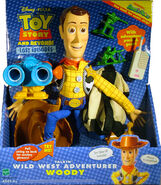 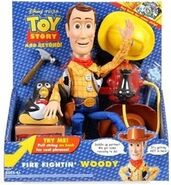 TS3 release of the Disney Parks Woody, based off the original Thinkway version 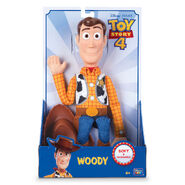 Toy Story 4 version of the Soft & Huggable Woody, with a closed mouth smile.
Add a photo to this gallery
Retrieved from "https://toystorymerchandise.fandom.com/wiki/Woody?oldid=6607"
Community content is available under CC-BY-SA unless otherwise noted.